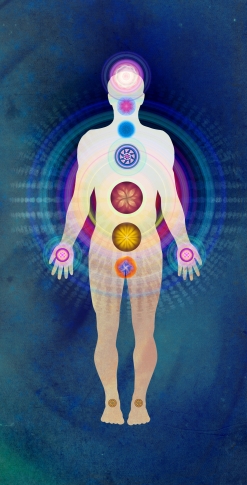 Chakras are the energy centers or vortexes of the body. These centers connect our physical, mental, emotional and spiritual bodies. There are seven major charkas in the body. The chakra system can be seen as a “seven leveled philosophical model of the universe”. The seven major charkas, which is Sanskrit for wheels or disks, are wheels of bioenergetic activity radiating from nerves that start at the base of the spine and continue on to the crown of the head. Although the energy of the charkas can be monitored they have no mass or substance of their own.

The first is the root chakra, which represents our physical identity. This chakra is located at the base of the spine and is associated with the color red. This chakra forms our foundation and is related to our sustenance, our survival instincts, to our sense of grounding or self-preservation. The root chakra brings us health, prosperity, security and dynamic presence. When it is clear you become more accepting, when it’s clogged you get resentful.

The second is the sacral chakra, which represents our emotional identity. This chakra is located in the lower back or abdomen and in the genitals. The sacral chakra is associated with the color orange and is related to the appetite, emotions, sexuality, self-gratitude and addictions. This chakra connects us to others through feelings, desires, sensation and movement. The sacral chakra brings us fluidity and grace, depth of feelings, sexual fulfillment and the ability to accept change. When it is clear, you are creative, when it’s clogged, you wallow in guilt.

The third is the solar plexus charka, which represents our ego identity, and is located in the mid-abdominal area. This chakra is associated with the color yellow and is known as the power chakra. It rules our personal power, control, will and autonomy, and self-definition, as well as our metabolism. When healthy, the solar plexus chakra brings us energy, effectiveness, spontaneity and non-dominating power. When this chakra is clear, you feel firmly committed, when it is clogged you get angry.

The fourth is the heart chakra, which represents our social identity. This chakra is of-course located in the heart and is the middle chakra, which divides the upper three and lower three energy centers. The lower three charkas are concerned with the material world and they spin slowly while the upper three chakras are focused upon more spiritual issues and spin at a faster rate. The heart chakra connects the upper and lower chakras together. The heart chakra is associated with the color green and is related to love, relationships and self-acceptance. A healthy heart chakra allows us to love deeply, feel compassion, and have a deep sense of peace and to feel centered and balanced. When it is clear, you’re compassionate, when it is clogged you’re frightened.

The fifth chakra is the throat chakra, which represents our creative identity. This chakra is naturally located in the center of the throat. The throat chakra is thus related to communication, self-expression and creativity, and is associated with the color blue. In this chakra we experience the world symbolically through vibration, such as the vibration of sound representing language. When it is clear you are honest and truthful, when it’s clogged you are in denial.

The sixth chakra is the third eye chakra, which represents our archetypal identity, and is located above the nose between the eyebrows, this chakra is related to the act of seeing, both physically and intuitively, and our imagination, it is associated with the color indigo. The third eye chakra opens our psychic faculties and our understanding of the archetypal levels, our self-reflection. When healthy it allows us to see clearly, when it is clear you’re intuitive, when it’s clogged you’re confused.

The seventh chakra is the crown chakra, which represents our universal identity, and is located at the top of the head. It is associated with the color purple or white. This chakra is related to our consciousness, awareness and self-knowledge. When developed, the crown chakra brings us knowledge, wisdom, understanding and spiritual connection. When it is clear you feel boundless bliss, when it’s clogged you grieve.

When our charkas are closed or clogged with blocks we are not as balanced or healthy as we could be. Dirty or imbalanced charkas result in feelings of lethargy, fatigue, and apparent blocks in one’s creativity and flow of abundance. By clearing or releasing negative thought forms and balancing or enlarging the charkas so they are all the same size, we open up the flow of energy which then leads to healing our issues and to good health. Clean and balanced charkas open up our energy flow, which leads to new ideas, peace, balance and synchronicity.